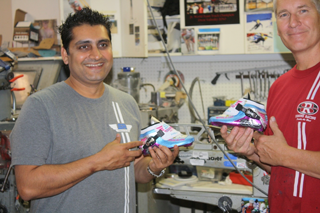 1993- The Introduction- The relation between David Simmons and Rahul Rana dates back to the year 1993. Rahul Rana, by then was already a multiple times National Champion in India and was training with the Muse Brothers Tony, Dante and Mark in Des Moines, Iowa.David Simmons was building up his own company Simmons Racing, which he had launched in 1991. Initially, when Inline speed skating took over from conventional Quad skates Rahul faced a lot of issues with his boots. He tried almost every boot maker but none of them met his standards. That is when Dante Muse introduced David Simmons to Rahul Rana. David worked patiently on Rahul's boot till all the various problems were solved and Rahul was comfortable in the boots. Post this Rahul went on to win multiple National Championships on Simmons boots. Since then, Rahul has skated on Simmons Racing boots and nothing else.

2013- In 2013 World Championships at Oostende in Belgium, almost 20 years since Rahul had met David for the first time, the Circle of life brought them together. Rahul talked about the need to have a stock boot which was of the finest quality and very close to the custom boots manufactured by David. The passion that both these individuals shared for this subject was eminent while they conversed almost every day for the next 12 days in Oostende. Both had a single goal in mind, to make the highest quality of Inline speed skating boot the world had ever seen. For the next one whole year both kept pondering about the idea and how to go about manufacturing the boots. Once David was absolutely confident that he and Rahul shared similar work ethics, he decided to impart the technological knowledge he had gathered over the last 23 years of manufacturing the finest racing boots this planet had seen. This was a big step for David because for the first time he would be sharing all his Innovations and designs, which he had developed to make these boots, with someone other than Jennifer Simmons, his life partner. He had worked on his own to create something for 23 years and all of a sudden he had to share all this knowledge with Rahul. But it was time to move on and the couple took a big leap in trusting Rahul Rana and that is how SIMMONS RANA WAS BORN.

Since its inception both of them have worked tirelessly as team, for more than a year, to produce boots in India with the same technology and precision that David has been using for building his custom boots. Rahul trained under the expert eye of David Simmons, for almost a year before rolling out the first pair of SIMMONS RANA RACING boots from the state of the art manufacturing unit set up in India.